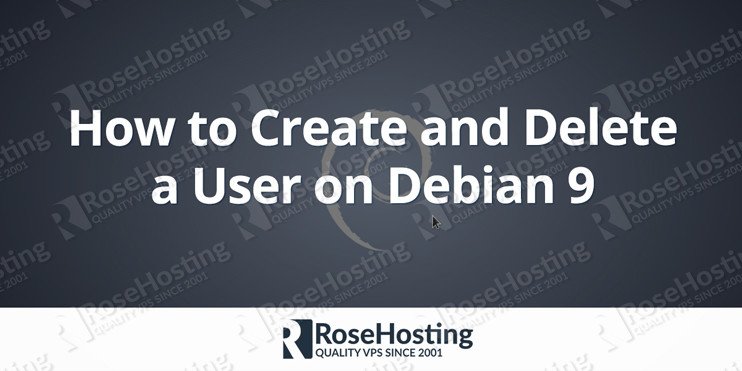 In this tutorial, we will show you how to create and delete a user on Debian 9. In the initial server setup, there is only one user account created and that is “root” user account. This root user has the highest privileges and has access to all files and commands on the system. But having too many privileges and running as root user is not always recommended and if you are not careful enough it can have destructive consequences for your system.

That’s why it is recommended to create additional users with limited privileges for your most common tasks. A new user account should also be created for any other user that will be using your server. Additionally, we will also show you how to give those users root privileges when necessary through the sudo command.

Create a new User on Debian 9

First, you need to establish a connection to your server as user root via SSH.

Once logged, you can create a new user with the adduser command. In our example, we will create a user called “newuser”. To do this, simply type in the following in your command line:

This is the output that you should get, for our new user called “newuser”:

With this, a new user and group named “newuser” have been successfully created. Its home directory has also been created at the following location on your server: /home/newuser

You can now log in as the “newuser” user to your server using the password you have set up.

Add User to the sudo Group on Debian 9

We will now show you ho to allow this new user you have just created, to execute commands as the superuser or another system user. To achieve this, you will need to add the user to the sudo group. All members of this group have sudo privileges.
By default, all new users are only added to their own group during the initial user creating. To add our “newuser” user to the sudo group, you need to run the following command:

You can also verify if our user is now a member of the sudo group , with the groups commands:

You should get the following output, showing that “newuser” is a member of both newuser and the sudo group:

You can now switch to this user with the su command:

and try to run commands with administrative privileges by using the sudo command. For example, a normal user does not have the privileges to run the commands necessary for upgrading all the system software on the server to the latest version:

If you try to run these commands normally, while logged in as the “newuser” user you will get the following output:

But since our user is added to the sudo group, we can use the sudo command to successfully update our system:

Delete a User on Debian 9

Once you no longer need the user we have created, we can delete it with the deluser command.

Let’s say we want to delete the user “newuser”. You can run the following command to do this:

The user is now completely removed from our system.

This is all you need to know when it comes to creating and deleting a user on Debian 9.

Of course, you don’t have to create and delete users on Debian 9, if you use one of our managed VPS Hosting services, in which case you can simply ask our expert Linux admins to help you create a new or delete an existing user on Debian 9. They are available 24×7 and will take care of your request immediately.