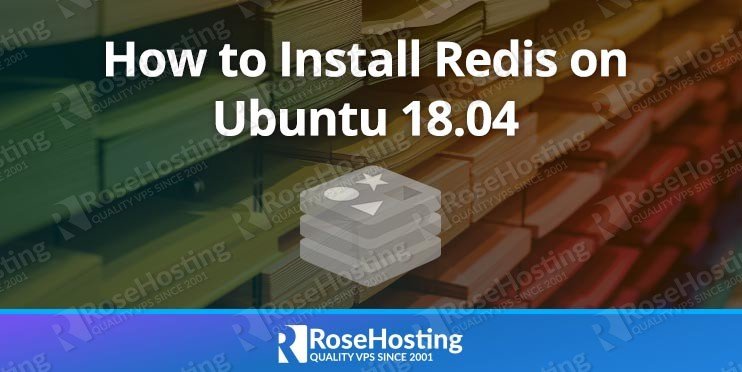 In this tutorial, we will cover the steps needed for installing Redis on Ubuntu 18.04, as well as a couple of ways to use Redis.

Redis (short for Remote Dictionary Server), is an open-source in-memory data structure store which can be used as a database, cache, and message broker. Redis is a NoSQL Key/Value store, which offers flexibility and improves performance. One of the best features of Redis is the huge range of data types or data structures that it supports, such as lists, sets, stored sets, hashes, bitmaps, etc…

Redis has built-in master-slave replication that allows a Redis server to be an exact copy of a master server’s database. Masters can have multiple slaves, and the replication is done asynchronously, meaning that the master will continue to handle queries while slave servers are synchronizing.

and replace “IP_ADDRESS” and “PORT_NUMBER” with your actual server IP address and SSH port number.

Before starting with the installation, you will need to update your system’s packages to their latest versions.

You can do this by running the following commands:

Once the upgrades are completed, we can move on to the next step.

In order to get the latest stable version of Redis, we will download and install it from the official Ubuntu repositories.

Run the command below to install Redis on your machine:

With this command, we will also download and install all the required dependencies.  Now we need to make one important configuration change in Redis.

We will open the Redis configuration file in nano with the following command. You are free to use any other text editor if you prefer:

To make Redis aware of this, we need to restart it with the following command:

With this configuration, Redis will remove any key based on the LRU algorithm when the max memory of 128 MB is reached. Save and close the file, then restart the Redis service:

Next, we will enable Redis on system boot:

We will also need to restart Apache or PHP-FPM service to get the php-redis extension enabled and ready to use on our server.

We can use Redis as an object cache for a PHP-based application, like Magento or WordPress. If you would like to configure WordPress with Redis, you can simply install the Redis Object Cache plugin and adjust the connection parameters.

Once the plugin is installed and enabled, we can use the Redis command line monitor to see the real-time output with the following command:

If you need to purge the Redis cache, you can simply do that using the Redis command line tool:

With this command, we will be able to execute commands in the Redis command prompt. To purge the cache, we will execute the following command:

Redis cache has been successfully installed on your Ubuntu 18.04 server, and we have also shown you a couple of ways to improve your productivity using Redis.

PS. If you liked this post on how to install and configure Redis on Ubuntu 18.04, please share it with your friends on the social networks using the buttons below, or simply leave a comment in the comments section. Thanks.