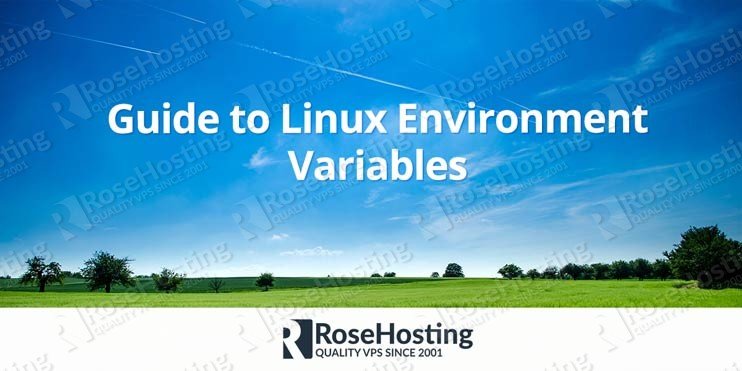 Coreutils package is home to the env and printenv programs. To list all the environment variables that currently have a value, you just type:

In the bash shell, there are two types of environment variables:

Once the bash shell starts (or spawn a shell script), you are allowed to create local variables that are visible inside your shell process. You can assign either a string or a numeric value to an environment variable by using the equals sign we assign the value of the variable:

Congratulations, you just created your first variable. Just remember that any time you need to reference the value of the rose_test environment variable, just reference it by the name $rose_test.
If you need to assign a string of values that contain spaces, you will need to use a single quotation mark to indicate the beginning and end of the string:

NOTE: It’s extremely important that there are no spaces between the environment variable name, the equal sign, and the value. If you put any spaces in the assignment, the bash shell interprets the value as a separate command:

The rose_test environment variable set in the child shell doesn’t exist when I go back to the parent shell.

This is accomplished by using the export command:

NOTE: Notice that when you run the command export on a local environment variable, you do not use the dollar sign to reference the variable’s name.

In this case, shows that there are eight directories where the shell looks for commands. Each directory is separated by a colon and there is nothing at the end of the PATH variable also the end of the directory listing. You can always add additional directories to the PATH by adding the new directory and adding another colon. The PATH likewise demonstrates the request in which it searches for orders.
In addition to Bourne’s standard environment variables, the bash shell also provides several variables, as shown:

BASH: The full pathname to execute the current instance of the bash shell.
BASH_ENV: When set, each bash script attempts to execute a startup file defined by this variable before running.
BASH_VERSION: The version number of the current instance of the bash shell.
BASH_VERSINFO: A variable array that contains the individual major and minor version numbers of the current instance of the bash shell.
COLUMNS: Contains the terminal width of the terminal used for the current instance of the bash shell.
COMP_CWORD: An index into the variable COMP_WORDS, which contains the current cursor position.
COMP_LINE: The current command line.
COMP_POINT: The index of the current cursor position relative to the beginning of the current command.
COMP_WORDS: A variable array that contains the individual words on the current command line.
COMPREPLY: A variable array that contains the possible completion codes generated by a shell function.
DIRSTACK: A variable array that contains the current contents of the directory stack.
EUID: The effective user ID of the current user.
FCEDIT: The default editor used by the fc command.
FIGNORE: A colon-separated list of suffixes to ignore when performing filename completion.
FUNCNAME: The name of the currently executing shell function.
GLOBIGNORE: A list of colon-separated patterns, defining the set of filenames to be ignored by expanding the filename.
GROUPS: A variable array containing the list of groups of which the current user is a member.
histchars: Up to three characters which control history expansion.
HISTCMD: The history number of the current command.
HISTCONTROL: Controls what commands are entered in the shell history list.
HISTFILE: The name of the file to save the shell history list (.bash history by default).
HISTFILESIZE: The maximum number of lines to save in the history file.
HISTIGNORE: A list of pattern separated by a colon used to decide which commands are being ignored for a history file.
HISTSIZE: The maximum number of commands stored in the history file.
HOSTFILE: Contains the name of the file that should be read when the shell needs to complete a hostname.
HOSTNAME: The name of the current host.
HOSTTYPE: A string that describes the bash-shell machine works.
IGNOREEOF: The number of consecutive EOF characters the shell must receive before exiting. If this value doesn’t exist, the default is one.
INPUTRC: The name of the Readline initialization file (the default is .inputrc).
LANG: The locale category for the shell.
LC_ALL: Overrides the LANG variable, defining a locale category.
LC_COLLATE: Sets the collation order used when sorting string values.
LC_CTYPE: Determines the interpretation of characters used in filename expansion and pattern matching.
LC_MESSAGES: Determines the locale setting used when interpreting double-quoted strings preceded by a dollar sign.
LC_NUMERIC: Specifies the local setting used for number formatting.
LINENO: The line number in a script currently executing.
LINES: Defines the number of lines available on the terminal.
MACHTYPE: A string defining the system type in cpu-company-system format
MAILCHECK: How often the shell should check (default is 60 seconds) for new mail.
OLDPWD: The previous working directory used in the shell.
OPTERR: If set to 1, the bash shell displays errors generated by the getopts command.
OSTYPE: A string defining the operating system the shell is running on.
PIPESTATUS: A variable array containing a list of exit status values from the processes in the foreground process.
POSIXLY_CORRECT: If set, bash starts in POSIX mode.
PPID: The process ID (PID) of the bash shell’s parent process.
PROMPT_COMMAND: If set, the command to execute before displaying the primary prompt.
PS3: The prompt to use the select command.
PS4: The prompt displayed before the command line is echoed if the bash -x parameter is used.
PWD: The current working directory.
RANDOM: Returns a random number between 0 and 32767. Assigning a value to this variable seeds the random number generator.
REPLY: The default variable for the read command.
SECONDS: The number of seconds since the shell was started. Assigning a value resets the timer to the value.
SHELLOPTS: A colon-separated list of enabled bash shell options.
SHLVL: Indicates the shell level, incremented by one each time a new bash shell is started.
TIMEFORMAT: A format specifying how the shell displays time values.
TMOUT: The value of how long (in seconds) the select and read commands should wait for input. The default of zero indicates to wait indefinitely.
UID: The real user id of the current user.

Hopefully, by following these guide you successfully learn all about Linux environment variables. Of course, you don’t need to setting or removing Linux environment variables yourself if you use one of our Managed Linux VPS services, in which case you can simply ask our expert Linux admins to do it for you. They’re available 24/7 and will help you fix your broken packages immediately.

PS. If you liked this post on Guide to Linux Environment Variables, please share it with your friends on the social networks using the buttons below, or simply leave a comment. Thanks.