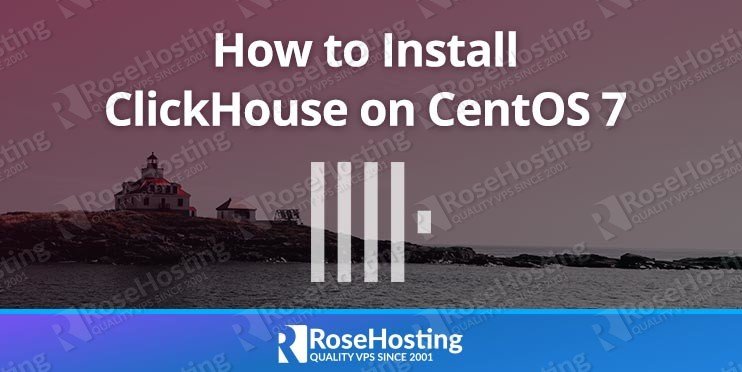 In this tutorial, we will show you how to install ClickHouse on a CentOS 7 VPS, as well as demonstrate some things that you can do in ClickHouse.

ClickHouse is a distributed analytical column-oriented database management system. ClickHouse has the ability to perform queries in real-time, making it simple and easy to run applications that require analytical results. The ClickHouse query language is based on SQL, which only helps to simplify and reduce the learning curve for the end user. ClickHouse has two main characteristics:

Let’s get started with the installation.

Step 1: Connect via SSH and Update

Remember to replace “IP_ADDRESS” and “PORT_NUMBER” with your server’s respective IP address and SSH port number.

Before starting with the installation, you will need to update your system packages to their latest versions. It’s easy to do, and it won’t take more than a few minutes.

You can do this by running the following command:

Once the updates are completed, we can move on to the next step.

For this tutorial, we’ll be using ‘vi’ as our text editor of choice. You are free to use your preferred text editor if you like. We will now create the repository file by using the following command:

Next, we will add the following content to the file:

When you are finished with adding the text, save and close the file.

Once you have added the repositories, you’ll need to enable them by executing the following command:

After successfully configuring the repository, we will be able to install the packages with the following command:

The ClickHouse server and client have been installed successfully.

The ClickHouse package creates a systemd service during the installation process. This is so that we are able to perform actions regarding ClickHouse such as starting, stopping, and restarting the database server. We can start our ClickHouse server by running the following command:

You should see an output similar to this:

If you want to check that the service is running successfully, we need to execute this:

If everything is set up properly, you should see an output similar to the following:

If that’s the message returned by the command, then we have successfully installed and started our ClickHouse server, and now we will be able to use and connect to the ClickHouse CLI.

To create a database, we need to start a client session by executing the following command:

The multiline flag allows us to enter queries that span multiple lines.

Now we will create a database named ‘test‘, inside of which we will then create a table named ‘person‘.

Since we are already inside the ClickHouse command prompt, we can create our test database with the following command:

You should see the output similar to this:

Before we create a table, we first need to enter the database that we will be modifying:

You will see the output which will show you that you have switched to the test database:

Our ‘person’ table will have several fields, such as ‘PersonID’, ‘LastName’, ‘FirstName’, and so on.

Now we can create the person table by running the following command:

If everything is created properly, you should see the following output:

That’s all there is to it – in this tutorial, we learned how to install ClickHouse on CentOS 7, as well as how to create sample databases and tables. Of course, there are a lot more capabilities in ClickHouse that we haven’t covered. This is why we suggest reading the documentation in order to fulfill the server’s full potential.

PS. If you liked this post on how to install ClickHouse on CentOS 7, please share it with your friends on the social networks by using the share shortcuts below, or simply leave a comment in the comments section. Thanks.