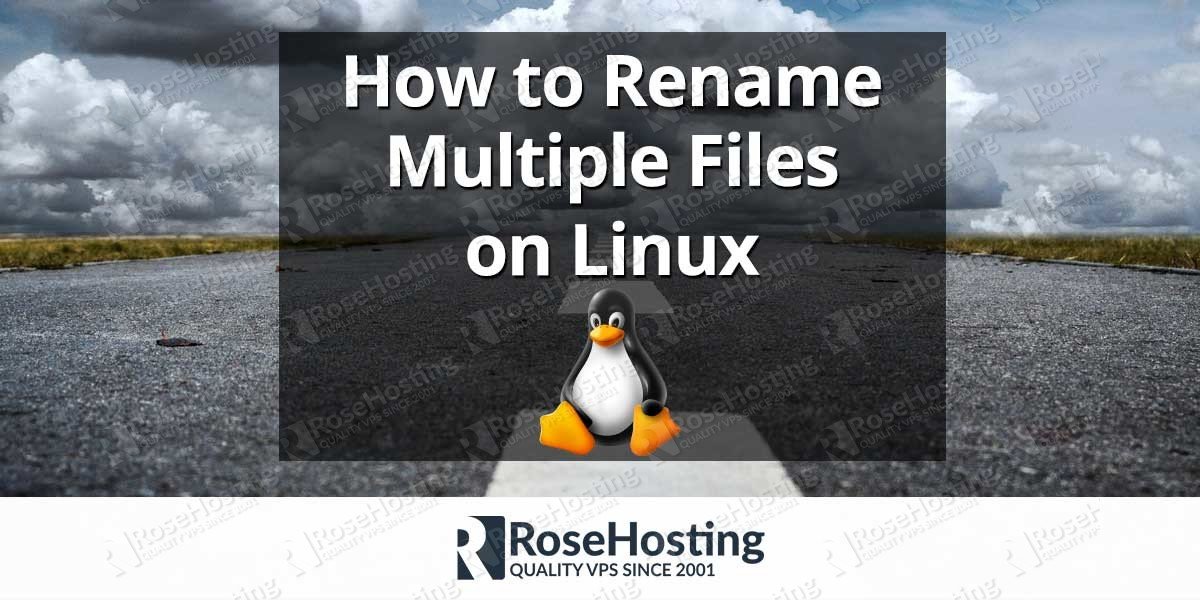 We’ll show you, how to rename multiple files on Linux . Every operating system in the modern world comes with several ways to interact with its file system. Whether it’s creating files, renaming them, copying them, or deleting them, they all come with functionality to efficiently carry out all of these tasks. However, one operation that most operating systems fall short with is renaming several files at the same time. Whether you need a pattern that the files need to follow, or if you just want to rename many files at one time, renaming files can be quite tedious.

Luckily, renaming software can help us solve this issue. In this tutorial, we will go through several options for batch renaming of files on Debian-based systems, as well as RHEL-based (RedHat Enterprise Linux) systems.

Debian and similar distributions such as Ubuntu and Linux Mint have a built in command line tool for batch renaming files. ‘rename’, offered on some Debian-based OSes, is one of the most powerful renaming tools on Linux. Rename works very similar to the way ‘sed’ works – it is essentially the sed utility for filenames. It can also use Perl expressions, so if you have some knowledge of Perl, this utility will work wonders for you.

Important: Some Debian-based operating systems that have ‘rename’ installed might actually have a version of ‘rename’ from the ‘util-linux’ package. This util-linux variant is a much simpler version of ‘rename’ which doesn’t have nearly as many features as the version that comes on Debian and Ubuntu.

You can find and replace text in filenames by executing the following command. Make sure to change the values of ‘search’ and ‘replace’ to the strings of text you wish to affect. Keep in mind that wildcards are available inside of the search field. Note: You can use the -n option to perform a ‘dry run’ first, which does not affect your file names. The -v option makes all operations verbose.

You can also rename the filetype of certain files by using this method – just replace ‘search’ and ‘replace’ with the current and new filetype. Note: Don’t forget to add a backslash before your filetype, or else the command won’t work.

If you would like to rename files and have a number incrementing at the end of the filename, this can be done as well with some Perl:

The reason for the ‘%03d’ in this command is to describe how many zeroes we want in front of our numbers. This is used to keep files in order when sorting files alphabetically. ‘sprintf’ is actually a function from Perl, used to format the name. This shows one of the strengths of this version of rename. Here is an example.

And in case you need a specific format for your filenames, there are plenty of Perl scripts available online for renaming files in all sorts of formats.

RedHat Enterprise Linux and its related distributions such as CentOS also have a version of ‘rename’ installed by default. It is the ‘util-linux’ variant, meaning that it is not as feature-rich as the one installed on most Debian-based systems.

This is all of the functionality available with the built in rename utility on RHEL-based systems. If you need to do more advanced renaming, bash scripting using loops and operations chained together will be the way to go. Here is an example for renaming files while adding an incrementing number to the end of the filename. Just change ‘search’ and ‘replace’ in the script to the respective names which you are searching for and replacing. Here is an example:

Step 1: Create a file for the script in the directory containing the files you wish to rename.

Step 2: Open the file with your preferred text editor, and add this script to the file. When done, close your text editor. (Don’t forget to change ‘search’ and ‘replace’ in the script to your searched and replaced filenames!)

Step 4: Execute your script by entering the following command.

And should you need a specific format for your filenames, there are plenty of bash scripts online designed around renaming files with many different formats.

Of course, you don’t need to rename your files using scripts on Linux, if you use one of our Blazing-Fast SSD VPS Hosting services – in which case you can simply ask our expert Linux admins to rename your files for you. They are available 24×7 and will take care of your request immediately.

PS. If you liked this post on how to rename multiple files on Linux, please share it with your friends on social networks using the buttons on the left, or simply leave a reply below. Thanks.

5 thoughts on “How to Rename Multiple Files on Linux”