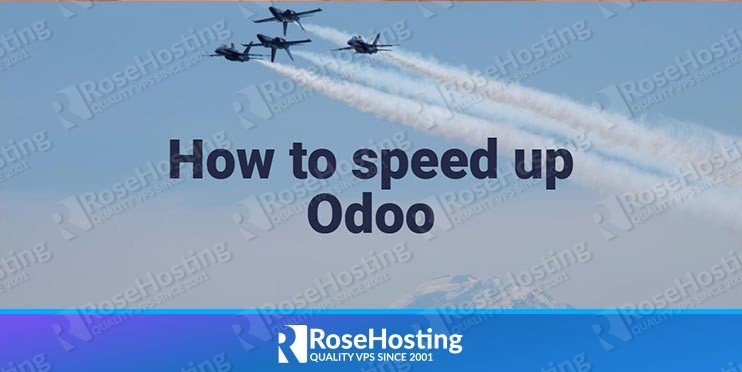 Odoo is the most popular ERP (Enterprise Resource Planning) software, written in Python and uses PostgreSQL as database back-end. The Odoo community edition is a free and open source software which includes project management, manufacturing, accounting, billing and sales management, warehouse management, human resources and more. There are about 30 core modules and more than 3000 community modules. Odoo is a complex software, and deploying a number of modules, having huge data inside the database etc. could induce a slowdown. The two major Odoo bottlenecks are disk access and database query time. In this tutorial we will show you how how to speed up Odoo.

In order to increase the performance of an Odoo instance, make sure to use:

1. Get an SSD VPS with more RAM

Like we mentioned previously, the random disk access speed is one of the major Odoo bottlenecks, so make sure to host Odoo on an SSD based VPS. Always install Odoo on a VPS with more RAM because Odoo is known as resource intensive application, and load the entire Odoo instance and its database into RAM if possible. Solid state disk drives excel especially in random access and they can achieve random access IOPS hundreds of times higher than conventional mechanical har disk drives because SSDs do not have any moving parts. No matter how much optimizations and configurations you do on your Odoo, if the server is not fast or powered by SSD, your Odoo will be slow. Getting the right hosting for your Odoo is the most important factor of your Odoo’s performance.

[ecko_alert color=”blue”]Did we mention that Odoo is a resource-hungry app? It seems so. But fear not, RoseHosting will provide you the ultimate solution – a performance-tailored Odoo VPS optimized to match your most demanding needs. Get an SSD VPS from us and find out what record-breaking Odoo speed really means. [/ecko_alert]

Other Odoo optimizations include:

2. Enable the Multiprocessing option in your Odoo configuration

To do so, locate the openerp-server binary file:

The output of this command should be like this:

For example, on a VPS with 16 GB of RAM and 8 CPU cores, edit the Odoo configuration file (e.g. /etc/odoo-server.conf), and add the following lines to it:

Do not forget to restart Odoo for the changes to take effect.

For example, if Odoo is installed on an SSD VPS with 16 GB of RAM, use the following settings in the postgresql.conf file:

Restart the PostgreSQL service for the changes to take effect.

Also, do not forget to run ‘VACUUM‘ manually periodically. ‘Vacuuming’ cleans up stale or temporary data, but please keep in mind that it is heavy on both CPU and disk usage.

Of course, you don’t have to speed up Odoo, if you use one of our Odoo VPS Hosting services, in which case you can simply ask our expert Linux admins to speed up Odoo for you. They are available 24×7 and will take care of your request immediately.

PS. If you liked this post, on how to speed up Odoo, please share it with your friends on the social networks using the sharing buttons or simply leave a reply below. Thanks.

15 thoughts on “How to Speed up Odoo”